Once a thirst trap MNF showdown for the AFC East title, this game has a whole different feel. The Bills are in contention for the #2 seed, and Belichick is on tilt. Coming into the game fairly healthy, the Bills are looking for their first sweep of the Patriots since pre-YTK. Make sure to read about the Tre White’s injury, as it is more interesting than meets the eye…

S Jaquan Johnson: He left late in the 49ers game and missed the past two games. Listed with an ankle, this was his first week returning to practice. He had two limited practices and a full to end the week. Based on the limited camera angle to show exact mechanism, I’d assume he is dealing with a medial ankle sprain or high ankle. Close call, but based on length of current recovery (three weeks), Jaquan is just scratching full health. He might be suited for another week off.

T Ty Nsekhe: Ty filled in for when Williams went out last week with a groin injury. He didn’t leave the game, finishing at RT through the last drive. However, they both landed on the injury report for groins. ‘Tis the season. He may have pulled it in practice on Wednesday. He went DNP for Thur and Limited on Saturday. I don’t think they rush him back, as Williams is already cleared to play.

TE Reggie Gilliam: Reggie played 14% of snaps, which was his par for the course recently. He never left the game in pain but was last seen on a run block in the 4th Q. He either had a minor sprain/strain that flared up postgame or a re-aggravation of a previous injury. He was shut down all week, which does raise an eyebrow for expectations to return.

QB Josh Allen: Still listed as ‘knee/ankle’ from a Joey Bosa reverse takedown, Josh is still practicing in full and ready to go. Looks good in shorts, and he’s looked good in a brace. Josh ditched that brace last week and appears to just be on this report for a formality. He’s now four weeks from a suspected grade 1 MCL knee and medial ankle sprains.

WR Stefon Diggs: Arguably a show of gamesmanship, Diggs got carted off from sidelines to locker rooms in the 4th quarter last week when he had his foot stepped on. He went full-go all week with a ‘foot’ designation. He’s most likely dealing with a bruise that just needed a quick x-ray to rule out a fracture. 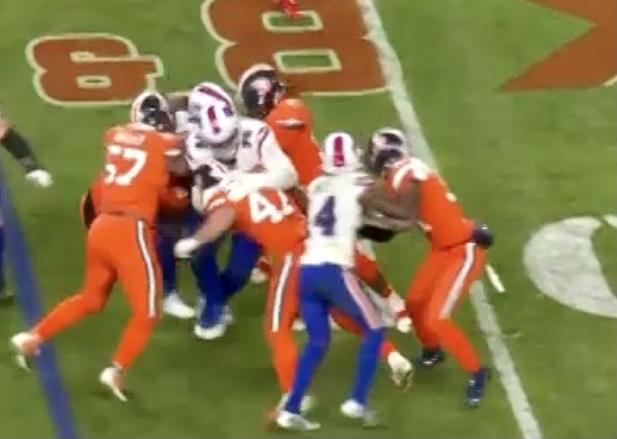 DE AJ Epenesa: Oddly, AJ was listed with ‘No Injury’ and was full practice all week.  During the last game though, he was up-ended and landed awkwardly on his head/neck.  He sat shaken for a moment, but it appears all signs and symptoms were clear! 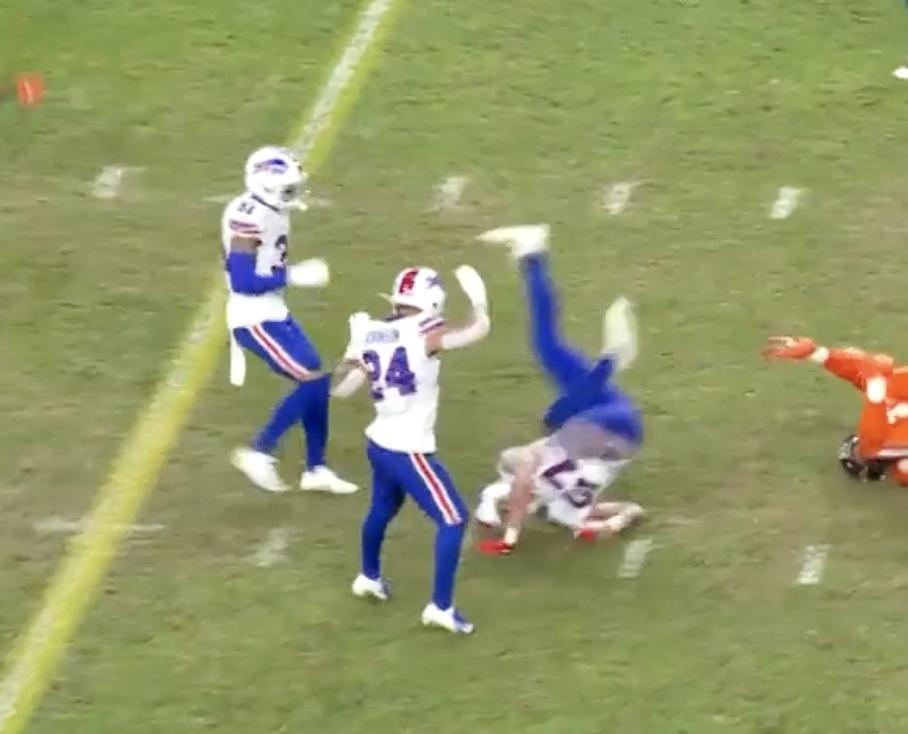 WR Andre Roberts:  After being limited last week with an Achilles, Andre left last week’s game with a back injury.  He was crunched pretty hard on a punt return in the third quarter and never returned.  He was limited in the middle of the week but returned to full practice at end of the week.  He will be playing this Sunday.

CB Tre White:  Tre left the game with a neck injury.  Now it’s being reported as a stinger, which is what happened.  However, he injured his neck contrary to the common mechanism.  Usually, the affected arm is on the side of the neck that was stretched. However, based on the film, Tre’s left arm was the effected side.

So what’s the catch?  Well, first let’s look at the last picture.  Tre appears to be grabbing at his left ankle, which on first view, I thought was a non-contact left ankle injury.  This made me wary of an Achilles’ rupture.  However, what he is doing is feeling the nerve pain/paralysis in his arm, trying to shake it off low.  However, in most scenarios, the side of the neck that gets stretched undergoes a rapid stretch and the nerves on that side would be affected, usually via the Brachial Plexus.

For Tre’s injury, his compressed side, the left, was the effected arm.  This is from a legit pinched/compressed nerve.  I would assume it was somewhere in the C6/7 region of the cervical spine.  Why this is important to note, is sometimes in rare situations, players are dealing with stenosis in the spine and will get uncovered in the offseason, ala memories of Eric Wood.  Hopefully, this was just a fluke, but Tre also missed that week for a ‘back’ injury earlier in the year.  I’d say concern is rightfully suited here.  Regardless, Tre was full-go all week and will be playing this Sunday.

T Daryl Williams: Daryl left last week’s game early with a ‘groin’ injury with most likely a mild strain. He appears good enough to play, but I’d be a little wary. He has been cleared but was limited early in the week.

Entering his third game off the IR, Milano’s snap share was at 42%, which was on par from the previous week. He got a little less work from the previous week, but that may have been score effects. Leslie Frasier did say he probably won’t be fully healthy this year, but they are hoping he can ramp up more as the playoffs approach. He may not get up to 75% snap shares, but I think 50% with upside is what we are looking at.

WR John Brown: Smoke is at six weeks post-injury for a reported high ankle sprain. He has been practicing for the past few weeks. I’m pretty confident that with the release of Kumerow, Brown returns to the lineup this week.

The Spy: The Enigma of Bill Belichick In 2020; Bust or Breaking Point?