The highly sought after and prestigious honor of NFL MVP “is presented annually by the Associated Press (AP) to a player in the National Football League (NFL) deemed to have been the “most valuable” in that year’s regular season. While there have been many selectors of NFL MVPs in the past, today the MVP award presented by the AP is considered the de facto official NFL MVP award and the most prestigious (Associated Press).” This column shall let the record show that in 2020, Josh Allen is not simply an MVP candidate nor a finalist but rather should be the winner of the honor. No quarterback has meant more to his team than Allen has. Allen’s infectious energy and nigh unmatched drive so “in your face” that you can almost touch it as though it were tangible.

It is well within the bounds of logic, reasoning, and fact to assert that no NFL QB has ever made developmental leaps that Allen HAS made. Many national pundits have espoused this point, even former Allen naysayers such as PFF’s Sam Monson and Austin Gayle. Because of Allen’s qualities, the Sean McDermott-Brandon Beane process and culture have been refined; also because of it, the team itself has transformed from a budding upstart to a titan of the gridiron.

What Narrative/Tone Does the National Media Carry?

The NFL MVP is evaluated, voted on, and determined by national media members, reporters, and analysts. That said, it is important to gauge the climate of the aforementioned conglomerate, as it pertains to Josh Allen. The general tone has been varied, to say the least, but there is no doubt that Allen has not enjoyed a level of praise as high as it is now at any time up to this point in his young career.

During the holiday break, Bill Reiter has been substituting for Jim Rome on The Jim Rome Show. On 12/31, Reiter talked at length about how Josh Allen is an elite level superstar and should be considered for MVP honors yet stopped short of saying Allen should win it outright. Bill Reiter went on to talk about how media members should strive to be entertaining but, more importantly, credible, fair, and realistic in their opinions and conclusions. This is to say that one should aim to “get right things right,” as they say.

Andy Nesbitt of USA Today recently penned a piece urging MVP voters to “do the right thing,” by voting for Josh Allen. He said this to say regarding the top 3 finalists for the award. 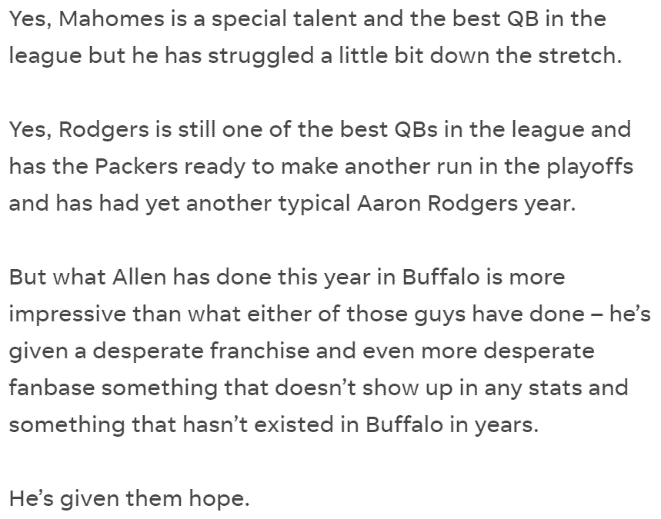 I personally have listened to 50+ calls from Bills fans to WGR 550 and read countless comments in Buffalo Fanatics Livestream chat sections emotionally touting Allen’s impact and ability to motivate the team and the fans in a year (2020) filled with so much darkness and frankly, despair. The importance of the cumulative “Allen Effect,” SHOULD be considered.

Tale of The Tape

As far as strength of schedule and victories over .500+ teams, no team or QB has more than the Buffalo Bills and Josh Allen. This is to say that Allen’s MVP level season has been built on the back of more difficult games versus more difficult opponents than his finalist counterparts in Rodgers and Mahomes.

Another factor to consider is the dynamic tempo of football for the Buffalo Bills; the main catalyst of which is Josh Allen himself. Without him, the team would mostly be unrecognizable. Furthermore, Allen has demonstrated the ability to keep the team at its highest tempo and intensity for arguably every game this season with the distinct exception of the drubbing in Tennessee.

Of late, Patrick Mahomes and the Chiefs have looked mortal. They have won multiple games in succession by one score or less. Meanwhile, Josh Allen has been toying with opposing defenses and gassing up the scoreboard. What is the proof of this? Other than the scoreboard. Surely Nick Wright will want proof, right?

We should evaluate point differential because of its functionality as a barometer of a team’s offense. How well can the offense score, and how much is the offense scoring in comparison to points given up? Generally, a higher point differential indicates a more effective offense. In the beginning of the season, the Bills were in the lower bowels of the point differential rankings but have since come up to +95. The point is that the reason for the turnaround is Josh Allen. Without his elite play, the offense goes nowhere. The same is true of all teams with great QBs. Meanwhile, the gap in the Kansas City Chiefs point differential has closed considerably, as it also has for the Green Bay Packers, though to a lesser extent. The Chiefs are playing more close games and are not lighting up the scoreboard as they normally do.

Josh Allen has thrown the least number of uncatchable passes and has now made and, more importantly, sustained double digit gains on completion percentage. Show the Fanatics another QB that has done this in the modern era… We will wait. For nearly the entirety of Allen’s career, NFL film analyst and expert Greg Cosell has consistently remarked that Josh Allen’s lack of accuracy was his primary limiting factor. The difference now in 2020 is that Allen has unlocked the key to his accuracy, and Cosell has explained that Josh Allen has done this not simply through mechanical adjustment of this throwing, but with developments in his football IQ. This is to say that he is reading defenses, playing with anticipation, and actively targeting weaknesses instead of forcing the play. These ARE the skills that ELITE quarterbacks have. Both Aaron Rodgers and Patrick Mahomes possess similar skillsets, but none have meant so much to their teams’ success than Josh Allen’s have this season. With Josh Allen, the Bills offense is a battering ram; without him, it would likely be a foam pool noodle. Comedy aside, it is the truth.

The other candidates in the running for the MVP honor are quarterbacks, and thus we must look at effectiveness. A measure of effectiveness worthy of evaluating is throwing itself. Josh Allen throws to receivers more than any other team in the league and on 1st down more than any other team in the league. He has made the Bills’ offense lethal, especially so in the red zone where Allen has NEVER committed a turnover. Meanwhile, the Chiefs/Mahomes have struggled mightily in the red zone in 2020, and the Packers/Rodgers tend to score more from outside the red zone.

The verdict is as follows. If Josh Allen is not considered (seriously) as the player who should win MVP, then the process by which the MVP is chosen must be called into question.

Lest we forget that in 2020, Josh Allen’s campaign has made the reigning MVP (Lamar Jacksons) 2019 campaign look rather pedestrian. Josh Allen is the reason why the Bills are where they are now, and there is little evidence to argue the contrary other than placing the praise on Sean McDermott, Brandon Beane, or even Brian Daboll. Their influence is passive, in that it does not actually happen on the field of play. Whereas, Josh Allen’s contribution is active in that HE is physically making the plays happen on the field in real-time.

Josh Allen changed a team, changed a culture, changed a city, and changed the game of football in his own unique way. The future is now. The Allen era is upon us. Allen might leave you out in the cold and be gone before you know it. If you are not paying attention, look! “Might Be Chilly.” – Steve Tasker

The Underhill Report: A FitzMagic-less Finale + The Belichick Empire is Deader Than Dead