So, we have the Buffalo Bills roaming into Kansas City this weekend, for a trip to the Super Bowl. After the chills on Saturday night, the Buffalo Bills turned their attention to the KC vs CLE game. Just as the game was looking like an unchallenging Chiefs victory, a very ambiguous injury occurred to Patrick Mahomes. He was swiftly pulled out of the game after an awkward tackle around his neck area in the third quarter. After he stood initially, he quickly went limp at the legs and required help to stand. His eyes looked dazed. Eventually, Mahomes jogged into the locker room. However, he never returned and was ruled out of the game with a concussion. Then, the Browns did Browns things, and here we are. What happened? Is he playing? What about his toe?

I remember watching it live and thinking the injury was odd: Replay-speculate-repeat. At first glance, it looks like he was concussed. Mahomes got up slowly but then stumbled down. They called it a concussion on TV, and currently, he is in the ‘concussion protocol’. It just didn’t add up, though, because he didn’t actually get hit in the head. However, watching it live, you can tell that his neck got yanked! Here is a frame by frame breakdown.

The initial blow: CLE defender, Mack Wilson, hit Mahomes on the back shoulder and upper back area.

The wrap up: Mack Wilson get him, but then his left arm slides up into Mahomes’ neck area. 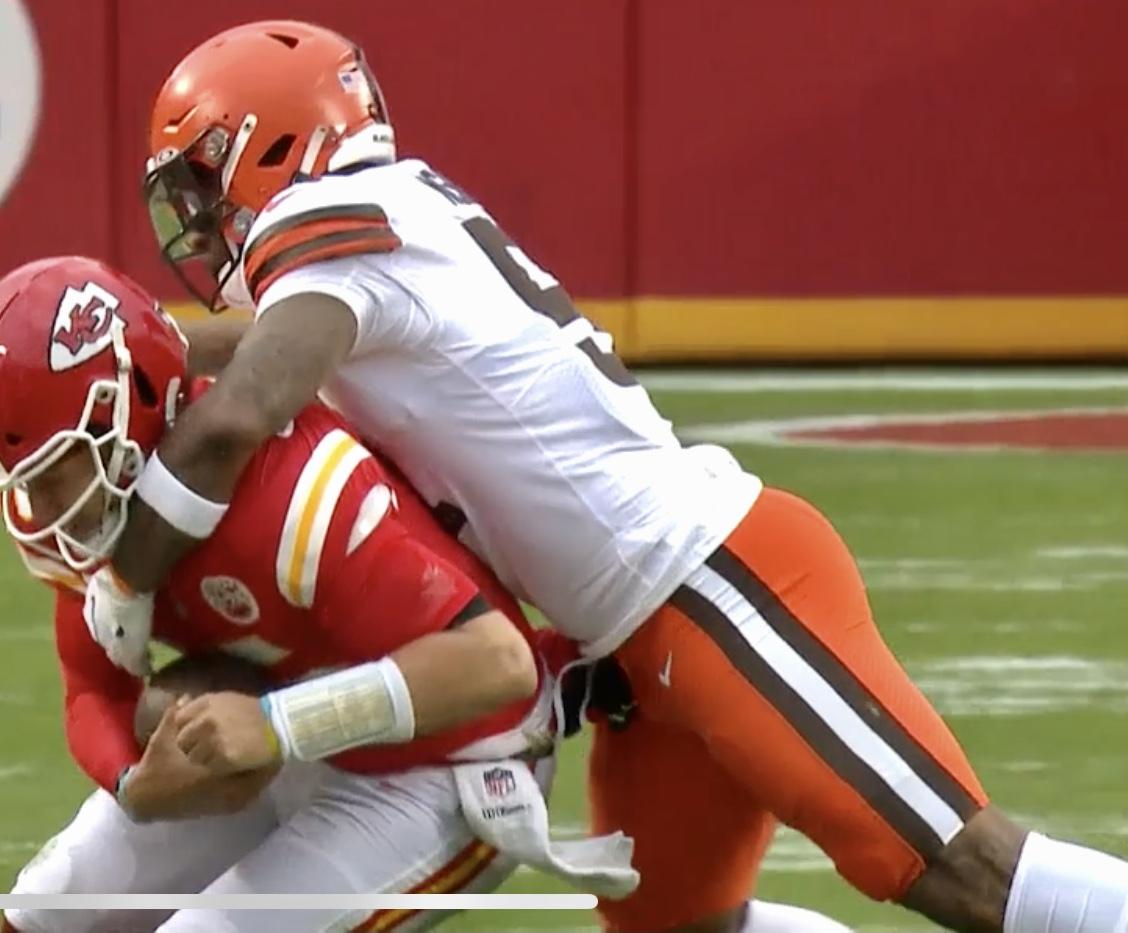 The takedown: Wilson’s momentum carries him around Mahomes’ back, and he takes him down by his neck, planting him face first. It appears this is the initial moment Patrick is effected.

The dirty: After Mahomes is down, Mack Wilson’s body weight carries him even further. However, he does let go of the neck. He essentially performs a ‘gator roll’, but while holding Mahomes’ neck. This is very scary. Keep an eye on the ball release and the decerebrate (stiffening) symptoms in his left arm.

So, what happened then? Well, here’s my ‘thigh thoughts’ and a timeline for the initial reaction:

Something happened at the neck there.

So then what is this nerve/neck thing? Well, look no further, as Gage Azeez @gageazeez84 was cracking that case at lunch on Tuesday.

So we are dealing with some type of carotid artery/nerve compression, thus causing Mahomes’ to basically faint. Without going into medical jargon Mahomes basically got a karate chop knockout, aka a ‘brachial stun’.

Mahomes was also placed in the ‘concussion protocol’. This was most likely out of the abundance of caution due to the initial symptoms. The protocol itself is five steps. With rumors of him practicing, he is most likely at Stage 4 already. It won’t even affect his practice, as he is normally in a non-contact jersey.

Well, if Mahomes’ can come back in one week from a Bruce Lee chop, then bring it on, because he also has a gimpy foot.  Mahomes suffered a toe injury earlier in the game. This is most likely a turf toe injury. It was his left toe, which to note, is the front leg for his throws. Mahomes was limping heavily at times thereafter and, most noticeably, will affect his running more than his throwing. However, it will limit his willingness to put pressure on that foot during his throwing mechanics. This can cause a shortened stride, which potentially, could cause him to come up short on some throws. Skill position players can miss a few weeks for these, i.e. Zack Moss.

Expect Mahomes to practice and play. He’ll be dealing with some distraction though: multiple injuries and added attention. Expect this must-see TV. The Air Raid at Arrowhead

Now What? NFL News before the AFC & NFC Championship Games