A​​fter each game, Blake Parnham breaks down the performance of the third team on the field: the men and women in stripes. In “Buffalo Bills Rulings Review”, Buffalo Fanatics‘ resident referee addresses the most consequential decisions from each Buffalo Bills game – whether they were right or wrong, no matter which team they benefitted. With reffing, sometimes the shorter the article, the better!

For the fourth consecutive week, the Buffalo Bills took care of their opponent. In rainy conditions on Sunday Night Football, the Bills went into Kansas City and walloped the Chiefs 38-20. But while the Bills looked sharp on all sides of the ball, they were comparably sloppy in the eyes of the officials. The Bills had a season high 10 penalties for 103 yards, the most in both categories all season. What’s more, there were three additional penalties against the Bills, which were declined. 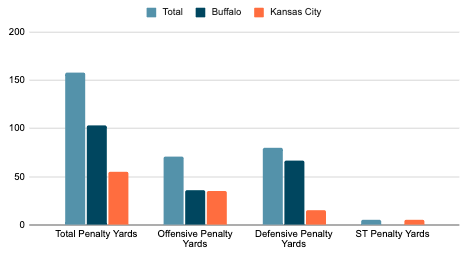 I’d be lying if I said I was surprised with the volume of penalties on Sunday Night. The crew, headed by referee Carl Cheffers, led the NFL with 16 flags-per-game last season.

What’s more interesting is that – evidently – the NFL valued the kind of games he was calling. The league rewarded him with the Super Bowl assignment. In it, his crew was widely criticized for how frequently they threw the flags. There were 15 accepted penalties for 158 yards, with 11 (for 120) going against Kansas City. Admittedly, this was an “All-Star” crew of officials, not Cheffers’s regular season crew. However, the amount and imbalance of penalties was talked about for weeks.

Nerds like me who follow NFL officiating knew that Cheffers and his crew would be on our screens a lot on Sunday Night. And they were. The Bills-Chiefs game had the most accepted penalty yards of any game during week 5. And the crazy thing is – I thought there could’ve been more.

Here are the five calls I want to talk about the most from week five:

This was the call that had Sean McDermott furious. To this point, there had already been three flags on the Bills defense. This was the first on Kansas City.

On this play, quarterback Patrick Mahomes was in shotgun. He handed the ball off to wide receiver Tyreek Hill, who was in the backfield. He cut to his left and used his elite speed to reach the outside, and picked up a nice gain due to a downfield block by wide receiver Demarcus Robinson on Tre’Davious White. The only issue was that Robinson had his hands all over White’s jersey. He was, correctly, called for holding.

The issue that McDermott (and a lot of Bills fans) had with the call was not the ruling itself, but the enforcement. This is why articulating the infraction is so important for officials, and one of the reasons why referee Ed Hochuli was so popular. Cheffers said it was a “ten yard penalty, repeat first down.” Had he said it was a ten yard penalty from the spot of the foul, perhaps McDermott and the Mafia wouldn’t have been so incensed.

The next play was a 1st and 5. It was a penalty on Kansas City, they gained yards and still kept the first down? Yes. Robinson committed the penalty fifteen yards downfield, at the 13 yard line. The officials brought the ball back ten yards from the spot of the foul, and repeated the first down. First and five from the 23. They got it right.

Already up and deep in Kansas City territory, the Bills were looking to add to their lead. They faced a 3rd and 1, and executed a short yardage play that they had been setting up for all season. The Bills offense was in I-formation with Zach Moss acting as fullback. Rather than having him block, they handed Moss the ball and he sprung through a massive gap on the left side for a big gain.

The only issue is that after Moss broke free, Dion Dawkins stuck out his left arm and tugged the shoulder pad of defensive lineman Frank Clark. It was holding. It sucks, because it was entirely unnecessary from the left tackle and wiped out a big gain. The only thing worse was that, on the very next play, Josh Allen committed intentional grounding. The drive was dead.

With Buffalo up 31-13 and Kansas City, facing a 4th and 3 from their own 32, the fate of the game was on the line. Patrick Mahomes missed his target, and it looked like the outcome had been decided. But then, for the eighteenth time to that point, we all saw that dreaded yellow icon on our screens.

The call had me screaming at my television. What else could Ed Oliver do? As Patrick Mahomes turned to throw, Oliver was barreling down on him. He was pushed from behind by offensive lineman Trey Smith. Oliver landed on Mahomes’s legs, and Cheffers threw his flag.

I know that officials protect quarterbacks as much as they can, especially the elite ones, like Josh Allen and Patrick Mahomes. The last thing any fan wants to see is a knee or shoulder injury to a star. But I really didn’t like this penalty. I would have hated it if it benefitted the Bills. (See you in a minute for #5).

This might be the worst offensive holding penalty I’ve ever seen, and I won’t spend too much time on it here. It was a 3rd and 9, and Allen scrambled for ten. It should have been a first down, but the referees felt Mitch Morse held his opponent. Check it out for yourself. I can’t say much more than that.

This was the very next play. Facing a 3rd and 17 after the holding penalty, Allen was looking to go deep. He was hit as he released the ball, underthrew a pass to Stefon Diggs, and was intercepted. It looked like an arm punt that would give Kansas City a chance to get back into the game. But like the 4th and 3 earlier, Cheffers threw his flag for roughing the passer. At least he was consistent.

Frank Clark hit Allen right in the chest and landed on top of him. The hit wasn’t late, and there could be an argument that Clark drove Allen into the turf. I didn’t think it should have been called. However, I thought it was more of a foul than the one on Oliver.

The announcing crew disagreed with me. Cris Colinsworth struggled to make sense of the call. Upon seeing the review for the first time, Al Michaels shouted “really!?” in disbelief, almost as if he was betraying his rooting interests for a brief second. However, after the penalty on Oliver a few minutes earlier, which I thought was a worse call, Colinsworth agreed. Moreover, the media has been largely critical about one of the roughing-the-passer penalties, but not the other.

I wonder which one?

Overall, I thought the officials had a poor and inconsistent game, but there is only so much space here. As critical as I was about these penalties, I honestly thought there could have been more, which is not a comment I expected to make about a game with twenty-three flags. Both sets of defensive backs are incredibly physical, and it looked like the Bills made a conscious effort to beat the hell out of the Chiefs receiving group in order to slow them down. In fact, there were a few times I felt Buffalo’s secondary could have been called for holding. But, then again, there were also several on Kansas City as well. The referees can’t call everything, and with the rain delay adding on, we’d probably still be watching the game if they did.

Next week, the Bills play on Monday Night Football against the Tennessee Titans. Referee assignments come out every Wednesday, so look to see who the Bills and Titans will have. If nothing else, hopefully this Sunday Night game will demonstrate that – even though they should be – not all officiating crews see the same calls the same way. Fortunately, the Bills and Titans have been assigned Clete Blakeman and his crew. Blakeman is one of the best in the league, and we should all hope it’s a much cleaner, more consistent game on Monday Night.