Yeah, so about last Sunday: definitely did not see that coming.

After all the hype and praise the Buffalo Bills received throughout the offseason, they definitely didn’t resemble the team they were projected to be. Stupid penalties, poor pass blocking, failing to create pressure: almost everything that could have gone wrong, went wrong.

But to lose faith in this team after the first game of an extended season is ludicrous. I wholeheartedly believe they’ll bounce back in a major way this Sunday against the Miami Dolphins.

The Dolphins, led by second-year quarterback Tua Turndaballova (that’s how you spell it, right?) are coming off a narrow 17-16 win against the fellow AFC East nemesis New England Patriots. Miami is very young. However, they’re made up of some of the league’s most athletic players.

Like all games against divisional opponents, this game will definitely be interesting and worth watching. Even at this early stage of the season, this matchup is a must-win. To do that, the line needs to seriously step up its game.

To say the Bills underperformed in Week One is an understatement. They shat the bed, and the offensive line is mainly to blame. In all, the O-line allowed 19 total pressures, ten of which came from T.J. Watt and Cameron Heyward, the two players I highlighted last week. They also had six holding calls, including three against #8 Melvin Ingram.

As much as I hate to rely on PFF scores, the Bills’ grades from last week were flat-out embarrassing. 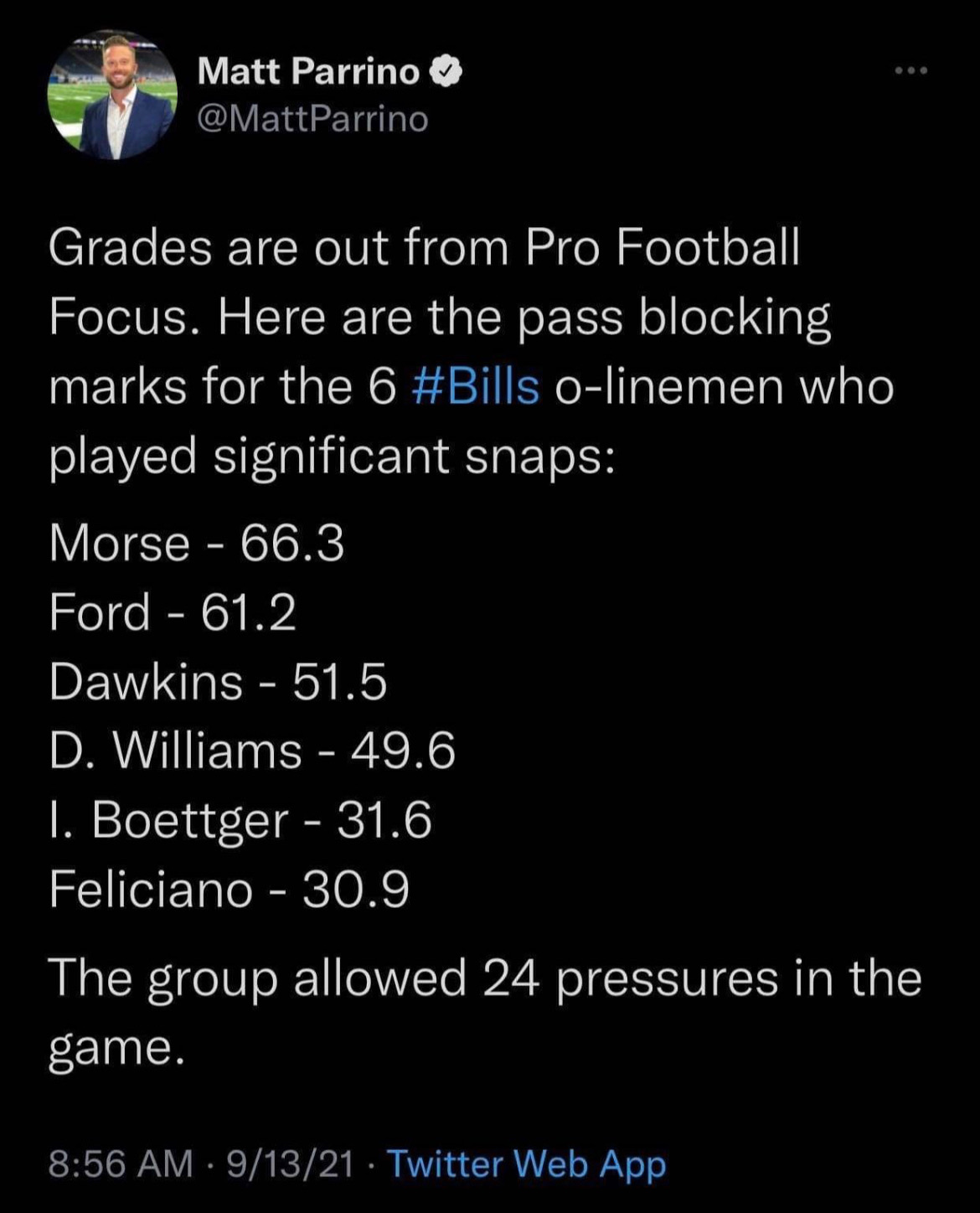 The numbers don’t lie. Mitch Morse was the Bills’ only consistent lineman all game, while the rest of the interior shares the blame. Cody Ford and Ike Boettger subbed in for one another every two drives until Ford ended up starting the rest of the game. McDermott later said he liked what he saw from Ford better.

As much as I argued during the offseason for Jon Feliciano to come back to Buffalo, Feliciano’s play was absolutely embarrassing. Boettger should see his snap count increase where Feliciano plays. If he doesn’t pick it up next week, I wouldn’t be surprised if he’s this year’s version of Quinton Spain.

The rest of the line didn’t do a great job either. Dawkins was consistently beaten by Melvin Ingram. He was also on the wrong end of a holding call that help stall the drive. Daryl Williams’s performance definitely didn’t resemble his fine work from last season. Poor pass protection and failure to seal the edge were among his biggest weak points

Morse was the O-line’s only bright spot, receiving an unspectacular 66.3 grade from PFF. It should go without saying that a successful line needs to have all five players working together and perform at a high level.

Although there were a lot of negatives, the run game wasn’t too shabby. Singletary had a nice performance, picking up 72 yards on only 11 carries. Matt Brieda, on the other hand, who played instead of the 100% healthy Zach Moss, didn’t have his best showing, managing only four yards on four carries.

Last season, Buffalo’s blocking was very bipolar, with the Bills being one of the best pass-protecting lines in the league while struggling in the run game. But based on their Week One showing, however, they need to fix both – ASAP.

I’d like to think the Bills will come out with an entirely new game plan on offense this week, particularly considering what they did last week.

Miami’s front seven, composed mostly of under-the-radar players, is led by 2019 first-round pick Christian Wilkins out of Clemson. They struggled to contain the Patriots’ offense, allowing 125 yards on the ground and 268 in the air. They also failed to get to rookie quarterback Mac Jones as he wasn’t sacked once, though the defense was able to apply pressure often and forced a laughable mistake.

Jaelan Phillips will be a name to keep an eye on this Sunday. The 18th selection in this year’s draft and a former teammate of Bills’ first-round pick Gregory Rousseau has received high praise from around the league, including Bill Belichick:

“His athletic skills will go up there against anybody, in any era.”

What the Bills need to do this week is come out more calm and relaxed, not trying to force any big plays. Last week, QB Josh Allen seemed to feel the need to put the team on his back and make huge plays, when it really wasn’t thanks to the poor pass protection. And while he made some of those plays look great, he shouldn’t be forced to make crazy plays every time he has the ball.

The Bills also need to shuffle their line a whole lot more, and not just with the three guys they had last weekend. I think we’ll see a lot of Ryan Bates this Sunday. The third-year player from Penn State has played at every position on the line and beat out Ty Nsehke for the role as swing tackle. He is more than capable of playing guard, so why not try it out?

So this weekend’s game plan is pretty straightforward: run the ball early and often (which they should do every game to establish dominance), keep Josh clean, rotate in some new faces, and don’t try to make too many extreme plays. If the offense can do that, everything should go smoothly.

The defensive line did somewhat better compared to the other side of the ball and the rest of the defense. Unlike last season, they showed that they could get to the quarterback. They were also able to not only slow down but completely eliminate Najee Harris from doing anything the entire game.

Mario Addison was a name that stood out to me. He had a strip-sack on QB Big Roethlisberger that was unfortunately taken back on offsetting penalties. Ed Oliver also had a great game, one where he really proved that he is really settling into this league as a defensive tackle.

The rest of the D-line didn’t have as positive of a performance. Rookie Greg Rousseau was unable to make as much of an impact as many thought he would and Jerry Hughes was regularly subbed in. That could be due to inexperience, or simply poor play. In any event, it was a less-than-stellar outing.

Star Louteleli’s absence was felt, but it didn’t feel like a tremendous loss. Hopefully, we can see big #98 make his return to the gridiron in almost two years this weekend.

Other than that, getting to the quarterback and slowing down the run stays crucial this week, as it does every week, but against a team as athletic as Miami those aspects are more critical than ever.

Gameplan vs the Dolphins

This young offensive line is composed of 2020 first-round pick Austin Jackson, later-round 2020 picks Solomon Kindley & Robert Hunt, and veterans Michael Dieter and Jesse Davis. With no big-name standouts, this is a group the Bills’ defense should be able to exploit.

The Dolphins had a low-scoring affair against the Patriots on Sunday. As a team, they had 74 total rushing yards, two more yards than Singeltary had on his own. As a unit, they allowed two sacks, one QB hit, eight hurries, and nine pressures against the Patriots. Tua also stood out as he threw for 202 yards and a TD, and also ran in for a score.

This game plan shouldn’t be too different for the Bills’ defense compared to the last time they played each other. Tua should be the main focus. As we saw last year, the Bills really got to the then-rookie as he threw three interceptions, although they were only able to manage a single sack.

It won’t be as easy to shut him down as it was with Big Ben, who is not nearly as mobile and athletic as Tagovailoa (and who we later found wasn’t easy to stop). Containing him in the pocket, getting to him early and often will help dictate this game for the defense. Preventing him from scrambling and making big plays will completely shut this offense down.

The same goes for Myles Gaskin, a very explosive running back who has a lot of speed and elusiveness. Play recognition in a very tricky offense will be key to slowing them down. Tua showed that he’s a maturing player in this league last weekend. Although they failed to put up a lot of points, they were able to pull out with a win thanks to a late score from #1.

Slowing this fast-paced offense down needs to happen. If the D-line can’t do it, the Dolphins could easily prevail in Week Two.

Everyone always has Week One jitters – including me – so I am sure Buffalo will come out looking much better this weekend. But if you remember last year, they had no preseason whatsoever and started the season 4-0. It’s too late for that, of course, but if the Bills want to have the Super Bowl type of season they were projected to have, this game is a must-win.

The Dolphins are arguably the biggest competition the Bills have in the AFC East this season, and maybe even more of a threat than they were last year. Lots of new faces and perhaps a more mature team; the only thing that isn’t new is the history between these two teams.

Just as I am every week, I am excited to watch this game, especially to see whether and how this game dictates the rest of the Bills’ season. Hopefully, Buffalo comes away with a much-needed W.

The Spy: High Stakes at Hard Rock for the Bills